OK, so this wasn’t just another night in Osaka, this was the annual Farplane get together in Osaka which put simply is one fucking crazy night!

Hosted by the Farplane store in American Village, the annual event attracts an eclectic collection of the most eccentric individuals in Osaka who come together for a night of diverse music, dancing, and stage entertainment. I heard about Farplane through a friend of a friend and after watching a video of last year’s event I was a little sceptical about getting a ticket, the truth is this isn’t the kind of night out I’m used to going to, I’ve lived in rural England most of my life after all. But in the end I parted with 3000 yen and got my hands on an advanced ticket. 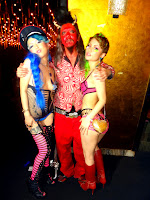 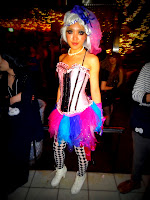 In a room full of what most people would describe as being utterly overdressed I was predictably underdressed wearing jeans and a shirt, but then, it’s not often you can share a room with a man covered head to toe in gold paint, wearing nothing but a strap on penis and yet still feel like the odd one out. 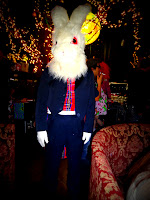 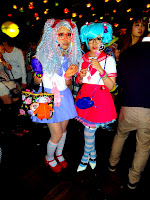 The party started at 4 in the afternoon and went through to 11pm with stage entertainment throughout the day and night hosting everything from DJ sets and dance acts to performers being suspended above ground from hooks attached to their backs and necks. The latter was actually a pretty weird thing to witness but most people around the stage seemed to enjoy it and even those being suspended seemed reasonably happy about the whole thing so who am I to criticise. This was just one part of a long night of diverse entertainment though and if there was a performance you didn’t like you could bet there would be something along before long that you did. It was a night like no other and something few outsiders get the chance to experience. If I’m still in Osaka this time next year I’ll make sure I’m at the next Farplane, only next time I’ll make sure I have a decent outfit to wear!

Email ThisBlogThis!Share to TwitterShare to FacebookShare to Pinterest
Labels: culture, nights out, Osaka

Richard
Jamkhed, Maharashtra, India
Currently living and working in rural India. Writing about the potential of small scale farms and the drawbacks of industrial farming methods.