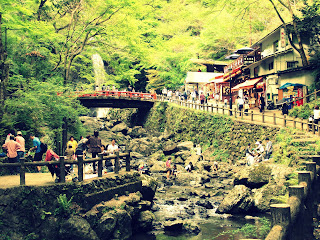 As I begin to learn more about Osaka I'm starting to realise that there are plenty of relaxing places to visit surprisingly close to the hectic urban sprawl. Minoh waterfall in the north of the city provides an excellent example of such a place. For just 30 minutes of your time and 280 of your yen you can access Minoh on the Hankyu line from Umeda. Upon arrival a 2.8km walk awaits you that leads to a pretty impressive 40 metre high waterfall set in quite beautiful surroundings

After working in Senri-Chuo in the northern suburbs for the past month I’ve encountered a lot of students from neighbouring Minoh city and all have recommended a trip to the waterfall. Having combined this advice with a little bit of my own internet research I decided to follow up the recommendation last Sunday; the first day of golden week.

Golden week inevitably means that Osaka is even busier than usual with the cities businessmen taking up the opportunity to have a few uncharacteristic days off work to spend time with their families. Judging from the train journey to Minoh it also marks a busy period for Japanese trainspotters. Virtually every station from Umeda to Minoh was packed with middle aged men armed with cameras waiting for a glimpse of their favourite train. This was certainly not a sight I was expecting in Japan!

Like many ‘cities’ in Japan, Minoh city isn’t really a city, it’s a small suburban town that thrives around the twin themes of the waterfall and its maple trees. For those in need of a snack for the walk up you can even combine the two by buying a pack of the local delicacy; deep fried maple leaves, to keep you energised. Personally the attraction of paying 700 yen for a bag of battered leaves is minimal so I made do with a packet of crisps.

The walk to the falls may only be 2.8km, but the uphill nature can be a little hard work, especially on a hot day. Thankfully the stunning scenery along the route makes it a little easier and if the walk does become a bit too much there are plenty of opportunities for refreshment on the way up too; together with several stalls selling drinks and snacks there is a butterfly museum and the beautiful Ryuanji Temple Benzaiten to keep you entertained. On Sunday there was even a rather talented woman playing a grand piano loaded on to the back of a truck!

The waterfall itself isn’t bad as waterfalls go, I’m no expert, but I enjoyed it. Equally rewarding was the scene around the waterfall with families picnicking around its foot, and dozens of children playing in the river. Even out here in the country there is no escaping the crowds though and after a taking a few pictures it was nice to get back on the path down and enjoy the relative tranquillity of the rainforest.

In Osaka peace and quiet doesn't really exist, not properly anyway, but Minoh does provide a nice release for those who fancy some fresh country air without having to spend a long time travelling. With a long hot summer ahead such spots will be invaluable. 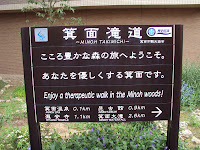 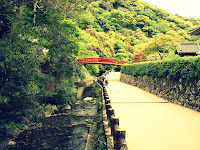 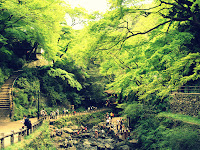 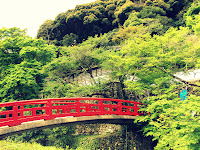 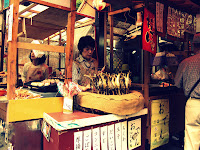 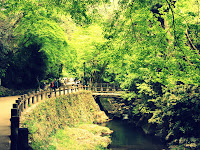 Richard
Jamkhed, Maharashtra, India
Currently living and working in rural India. Writing about the potential of small scale farms and the drawbacks of industrial farming methods.